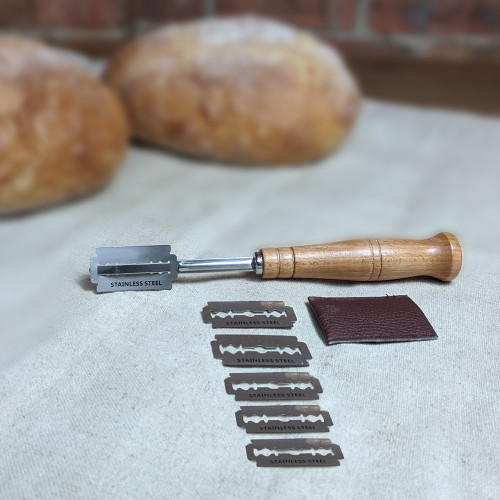 Why Should You Use a Lame?

“A lame [LAHM] is a double-sided blade that is used to slash the tops of bread loaves in artisan baking. A lame is used to score (also called slashing or docking) bread just before the bread is placed in the oven.

Often the blade's cutting edge will be slightly concave-shaped, which allows users to cut flaps (called shag) considerably thinner than would be possible with a traditional straight razor.

A slash on the loaf's surface allows the dough to properly expand in the oven without tearing the skin or crust and also allows moisture to escape from the loaf.

It also releases some of the gas [also known as Oven Spring], mainly carbon dioxide, that is trapped inside the dough. Proper scoring also allows the baker to control exactly where the loaf will open or bloom.

This significantly improves the appearance of baked breads. Scoring, finally, creates varieties in forms and appearance. It brings out the bread baker's artistic talent, allowing a unique signature.”

The Lame is useful not only for the consistency of the bread, but you can put in designs, like an X, a heart, or even a hashtag!

Try a Lame from Sassafras–– it comes with five removable blades and a sturdy wood handle. And be sure to share your photos with us! 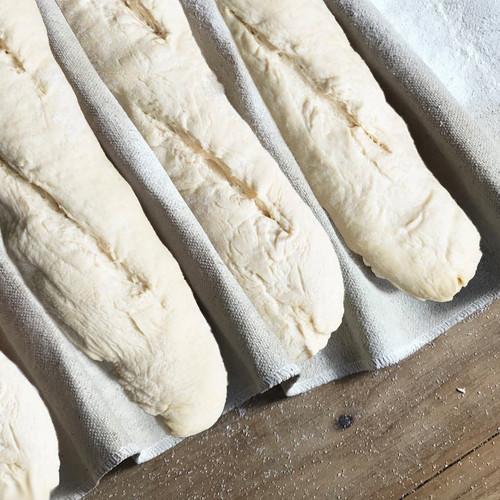 What is a Bread Couche Used For?

According to the San Francisco Baking Institute,

A couche (ko͞oSH) is a “Linen canvas for proofing bread is mainly used in France and is called (couche) meaning: layer, diaper, lay down or verb go to sleep (coucher)...

“Made of natural flax fibers with no chemical color or setting used, linen is the best material for proofing bread. Linen is very durable, but flexible and light, which allows the folds needed separating the shape of dough.

Linen will absorb the excess moisture of the dough and minimize stickiness during proofing or overnight retarding but will not dry it out, giving a nice thin crust.

The fabric can last forever if scraped or brushed after every usage, and then hung to dry before using again. If washing linen, it must be cold water and hang dry. It might shrink.”

The Professional Bread Couche from Sassafras is great for keeping your bread loves in shape during their last and final proof before scoring the dough and putting them in the oven. Great for baking long, beautiful baguettes!